What's the difference between a recession and a housing crisis?

When purchasing real estate, it's important to base buying and selling decisions on what's really happening, and not on what the media says. When you turn on the news these days, there is the talk of an upcoming recession. We are currently in the midst of the longest economic recovery in American history. What ends an economic recovery is an economic slowdown, or a recession, which is defined as two consecutive quarters of a decrease in GDP (Gross Domestic Product).

The definition of a recession is NOT a housing crisis! This fall, the word recession is going to be all over the news...you are probably already hearing it in the news. Talk of a recession will continue until election day and the majority of people believe that a recession will happen in the next year. In my opinion, a recession is inevitable - this historic recovery can only last so long. When the next recession comes, what will trigger it? A recent survey on Realtor.com showed that the #1 and #2 triggers for the recession in 2008 were a meltdown in the housing and mortgage markets. The same survey sample feels that the #1 trigger for a recession today will be a trade war, the #2 trigger is a stock market correction and #3 is a geopolitical event. A housing slowdown was #9 on the list! A "slowdown," not a "crisis." The same people from the same survey who said that a recession was coming also believed that housing prices would appreciate over the next 5 years.

It's understandable that the word recession is so impactful right now. We are all still a little shell shocked from 2008 because many felt so much pain. A recession will come but it will not duplicate 2008. Economist predicts that the next recession will replicate the recession of 2001. In the 2001 recession, the stock market fell almost 25% while housing prices went up 6.6%, almost double historic norms. During a recession, we tend to see investors pull out of stocks and put their money in real estate - as real estate has a proven track record to be the safest real estate investment over the long term.

Between now and the election, half of the country will believe that the whole world is falling apart. The other half will believe that it's the best economy that we have ever seen. Whichever way you lean is entirely up to you, but what I want you to know is that in the past 5 recessions, only two had a negative impact on housing: 1991 when the real estate market dropped 2% and 2008 when the real estate market dropped almost 20%. In the other three recessions, home prices went up as money moves into real estate - the safest investment on the planet!

So what should you do? At the real estate seminar I just attended in Anaheim with 6,000 other Realtors, the economist and experts are telling us, agents, to "double down". Buy real estate today! With these low-interest rates and uncertainty in the stock market, buying real estate is one of the safest investments you can make. If you want to discuss buying another home to live in, buying 2-4 units, or a vacation home, let me know. My job is to be your trusted advisor and filter out what the media is selling. I'm available to discuss your real estate plans whenever you need.

As always, I appreciate your referrals and continued support. 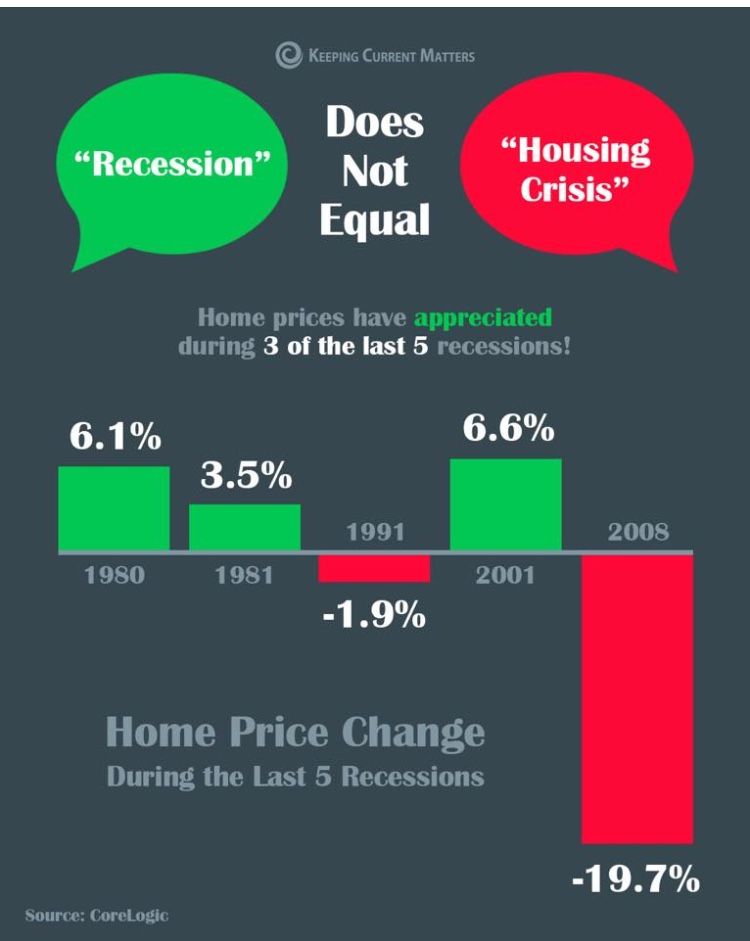 Buyers Are Finding More Space in the Luxury Home Market

©2022 Berkshire Hathaway HomeServices California Properties (BHHSCP) is a member of the franchise system of BHH Affiliates LLC. BHH Affiliates LLC and BHHSCP do not guarantee of all data including measurements, conditions, and features of property. Information is obtained from various sources and will not be verified by broker or MLS.

This information is deemed reliable but not guaranteed. You should rely on this information only to decide whether or not to further investigate a particular property. BEFORE MAKING ANY OTHER DECISION, YOU SHOULD PERSONALLY INVESTIGATE THE FACTS (e.g. square footage and lot size) with the assistance of an appropriate professional. You may use this information only to identify properties you may be interested in investigating further. All uses except for personal, non-commercial use in accordance with the foregoing purpose are prohibited. Redistribution or copying of this information, any photographs or video tours is strictly prohibited. This information is derived from the Internet Data Exchange (IDX) service provided by Sandicor®. Displayed property listings may be held by a brokerage firm other than the broker and/or agent responsible for this display. The information and any photographs and video tours and the compilation from which they are derived is protected by copyright.Â Compilation © 2022 Sandicor®, Inc.